Listen up! Hello! We’re starting the show!” Bob shouts at his actors, and they drift slowly into place. It is 9:30 on a Tuesday evening, six nights before his play is set to open. The only place he had found to rehearse was a second-floor dance studio near Union Square. The room is stuffy and the overhead fans squeak, but tonight nobody is complaining. 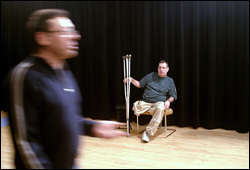 Theater groups rehearse every night of the week in New York City, but there’s no other group quite like this one. Nearly half of the 25-person cast are former alcoholics and drug addicts. They don’t have head shots or acting coaches; they just have memories of their own near-destruction to guide them. Most go only by their first names, as prescribed by 12-step programs.

In 1991, Bob, then 40, decided to write a play. He’d been working at an auto-parts factory for 21 years, and during breaks at his job he began to pen vignettes about subjects he knew well—drinking, drugs, and hitting bottom. Those short scenes, 20 in all, became Visions, which has been performed around New York and New Jersey for 15 years—in halfway houses, homeless shelters, churches, jails, and treatment programs.

This week, for the first time, Bob and his volunteer troupe are premiering in a real theater. Visions has a six-day run at the Hudson Guild Theatre on West 26th Street. But first, the cast needs to rehearse. Somebody tapes a poster to the wall listing the play’s 20 scenes, another person pushes a button on a CD player, and the run-through begins.

Every scene in Visions is a variation on a theme: addicts hitting bottom. A husband rifles through his wife’s pocketbook to steal money for drugs. An alcoholic winds up in jail, where other inmates attack him. Another alcoholic gets d.t.’s and writhes around, trying to fight off invisible bugs. A young woman staggers down the street with a belt tight around her arm, then collapses and dies.

One scene features a married couple. “What, no beer again?” the husband shouts. “And where’s my damn supper? Hah? I’m tired of breaking my ass and all you do is pop pills all day long!”

The husband screams, shoves his wife, grabs her by the hair. She cries and pleads. Their son jumps in between the two. By the end of the scene, the wife is alone onstage, clutching a pill bottle, crying.

The scene’s energy emanates not just from its violence or its volume, but from the couple’s authenticity. “I don’t think of it as acting,” says Jane, who plays the wife. For her, the scene is a familiar one; she says her first husband was an abusive alcoholic. “When he was sober, he was a wonderful man,” she says. “When he was drunk, he was a monster.”

Jane herself was drunk when she went to her first 12-step meeting; she had been gulping Southern Comfort before walking in. But she was sober for the second meeting and has been clean now for 14 years. She met Bob in recovery and he invited her to join the cast in 1992. Ever since, she’s been playing the role of Abused Wife.

These days, Jane, 57, owns a beauty salon in New Jersey and has a new husband, Bruce, who she met during her drinking days. They got sober together, and now he has the part of her abuser in Visions. (“In real life, he’s totally opposite,” she says.)

Bruce, 59, was once an aspiring actor living on the Upper East Side. He played a waiter on a soap opera and starred in a television commercial. But his acting career never quite flourished, and alcohol and heroin took over his life. He drank seven pints of wine a day, and when he could scrounge up the money he stayed at a flophouse on the Bowery. Other nights, he slept outdoors. “I’ve slept in every park in New York City,” he says.

Every time Jane and Bruce perform, they get a strong response. “Even doctors have cried over that scene,” Jane says. In 2001, when they performed at a homeless shelter on Wards Island, men came up to them afterward, tears in their eyes, and said they could identify with Bruce’s part. For Jane, the most memorable performance took place at a women’s shelter in Paterson, New Jersey. After the show, a young woman approached and requested her autograph.

“Why do you want my autograph?” Jane asked.

“I want to remember the person who might’ve helped change my life,” she said.

For years, the criteria for someone to get a part in Visions was that: (1) they knew Bob, and (2) they didn’t mind working for free. For this show there are still no paychecks, but the troupe has expanded. To recruit volunteers, Bob placed ads in Back Stage and on Craigslist. Still, there are enough original members in the room to remind everyone of the group’s roots.

Seated in front of the makeshift stage is the show’s lighting director, who calls himself Telephone Tom. He first saw Visions performed in a church in Fort Lee, New Jersey, in 1992. “I was touched,” he says. “I stayed after and asked if they needed help.” He has been with the group ever since.

Telephone Tom, 47, is a former crack addict and alcoholic who now works in construction, though he is missing half his right leg. “I lost it, so if you find it let me know,” he says. “I lost it in ’99. Bad circulation. I like to say standing in bars too long, but I was a heavy smoker.” During live performances, he adjusts the lights by hopping up and down a ladder.

He’s seen the show so many times by now that he can recite every line, but still he gets choked up, especially during the scene where an addict learns she is HIV-positive. “After 13 years, it still has that effect,” says Tom, who is HIV-positive. “I’ll start crying.”

The run-through lasts a little longer than an hour. While only one or two people flub their lines, the scenes do not always flow smoothly; Bob has to prod the actors to enter or exit on cue. After the rehearsal ends, someone removes a few chairs from the stage and another person rips the scene list off the wall. It is past 11 p.m. when Bob and the last actors straggle out the door.

Opening night was less than a week away. The theater has 100 seats, and so far Bob had sold only 150 of the 800 total tickets. But he wasn’t concerned. His goal was never to make money; it was to reach what he calls “our audience”—other people in recovery. And so he had given away 250 tickets to treatment centers and shelters. “With 250 people coming from all these organizations, it’s a success now,” he says. “If I never sold another ticket, it doesn’t matter.”